Still don't have a name for her, we'll have to work on that

We got an inflatable kayak to go with the boat.  We were scrambling around for what to do, cause we need a way to get to shore - well mostly to get Chuck to shore - for a week or so now, and then for a couple of weeks in the fall.  After that we’ll be in canals and mostly won’t need a dingy.  In a couple of years when we get out of the canals we’ll need a proper dingy, but why build/buy/carry one already.
First we thought about an optimist sailing dingy, but honestly, there a little too big and it was going to be a nightmare going to pick up the one we wanted.

We looked at all sorts of options and then came across an inflatable kayak.  Not too expensive, not too heavy, it seats 2 adults and a child (or dog) and we can pack it away in a small space.

We ordered it and after considerable trouble with Sweden’s utterly useless UPS (really, those Swedes need to work hard on efficiency!) we got it.  Launched it and the man HATED it.  Really deeply hated it.

Fast forward to today, we had to launch it to get his chunkiness to shore to attend to his business, we pumped it up, this time pumping up the floor MUCH harder, and doing it first.  Well, that was a whole different boat!  Alright, it is not a dream kayak, but it is pretty stable, it’ll steer and paddle, though we could do with longer paddles, the boat is WIDE…..

And Chuck?  The first time we blew it up, not so enthusiastic.  Now that it’s his ticket to shore?  All about it. 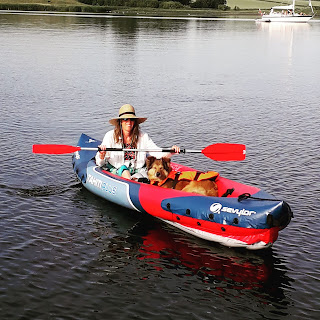