Went running the other day up by where I work.  I run in a ravine there, on a trail.

I never see anybody.

In the park leading in to the ravine, yeah, sometimes, and I've seen bunnies and deer and birds and lots and lots of snails that I stop and scoot (well, gently toss) off the path so they don't get stepped on, and folks.

However, once I hit the trail, no one.  Ever.

Until the other day when I went running there.  I was bounding (well, more like jogging, but allow me some delusions) along happily feeling great when I saw someone ahead of me on the trail. Walking.

Let me just say that it is 7am.

He's carrying a chain saw, at 7am on a deserted trail.

I will also say that he was wearing a hard hat, with ear protectors, and a reflective safety vest, but still, it's 7am, a little early for the Parks and Rec department, I would have thought.

He hadn't heard me so I slowed to his pace and had a little internal debate about what to do.

Normally in Spain when I run on the trails I have to dog, and he provides a measure of protection.  The reality is that I'm not sure his Chuckiness would actually do anything, but neither are they, so it works.  I did not have the dog with me this time.

People don't actually in real life get murdered by chainsaw wielding nutjobs in parks in the Greater Toronto Area, I mean, it's not impossible, but the stats on this have got to make it very unlikely.

I followed him along for a while and decided it was fine, accelerated and passed him.  Then I passed the other 6 guys who were ahead of him, all in hard hats with ear protectors and safety vests.

Guess the municipal workers in that area start pretty early.

Weirdly, I didn't see them on the way back through this narrow ravine out and back.  Like they'd disappeared.
Posted by oreneta at 1:54 PM 3 comments:

As a small, indeed minor offset to today's dreadful news, I small and wonderful moment of lovely humans, let's remember that the lovely ones far outnumber the horrors.

Today with the dog I went over to the local school yard for the early morning walk, and low and behold, mowed into the grass is a lovely artistic swirling curving wave of a pattern, doubling back on itself and winding around the sides of the field.

I was marveling at it, thinking wonderful thoughts about humanity in general, and the fact that someone would go to the trouble, just because it was lovely, when up pulled the custodian of the school in his car.  In my excitement, I point it out to him and, in retrospect, rather unsurprisingly, turns out that he's the lovely mower!

I express my delight at starting off my day seeing it and he replies, "The kids love it, and if the kids love it, I'm right there for it.  I see them walking the maze really often, even some of the teachers do."

Thanks Mr. Custodian, (name omitted for his privacy, but also cause I think he's got to be one of the coolest folks around).  Made my day, and seems you regularly make a whole lot of other people's days too!
Posted by oreneta at 8:04 PM 3 comments:

By no means am I going to claim that I have found the key to the universe, but for me, to get my butt out the door and running, the trick is to not think about it.  That sounds dumb, but I lay the clothes out the night before, everything in order, then when I get up, it's just part of the routine.  Simple as that, and, like brushing my teeth, it isn't something I enter into long debate with myself over....gee, don't feel like brushing my teeth, am I going to brush my teeth this morning, or shall I put it off to another day?

Just don't even consider it, part of the routine on automatic pilot.
works, for me
Still wish it was something I look forward too though, which normally it's not.


.....later.....today, while running, I had warm sun on me, masses of wildflowers, red-winged blackbirds, a goldfinch, two rabbits, two deer and a quail!  Plus I ate rasberries and blueberries.

lazy days that get strangely busy

Second sorta kinda lazy day in a row, as in I didn't get up early and didn't rush.

Yesterday was supposed to be a nothing kinda day, and it kinda was, went to the library, got dog food, kids bought candy, make a pie for a birthday for a friend, then it sort of went sideways when youngest stood on a rusty nail and we tried to figure out when her last tetanus shot was.  A long time ago in fact.  We should probably all get it updated.  Maybe with the passports. Every time you renew your passport, get a tetanus shot.  Hmmm, that might work.

Took the Catalan girl to the airport to fly home, have a story and a half to tell from that.

Today, another go at a quiet kind of day.  Eldest was off at the crack of dawn, the Man is working on a pair of big translations, and youngest is sleeping.

Slept in, strange but strangely good breakfast, finished my work for the weekend, had a cup of tea, and set off to walk the dog.

Normally in the mornings we go to a nearby park and I throw buckets of pine cones and he chases them.  All good, I hadn't planned on that today as it is rather late, and he has a habit of chasing people on bikes and loud running kids.  Kinda dorky of him, but there it is.  Today though, there were a bunch of dogs running around off leash and not too many kids, so we ventured into the park.  Got a bunch of tosses in, then the heavens opened....it was raining good and hard on us!

Back to the book, a little damper, the dog didn't know I had a long walk planned, so he's not disappointed or anything.

These kinds of weekends are pretty sweet too.
Posted by oreneta at 7:52 AM 2 comments:

Here in TO I finally have time to do some running again, and I really prefer running trail, indeed I totally SUCK at running on the road.

It is kind of sad that I want to run trail here, cause in comparison to what I have on offer in Catalunya, it's pretty sad pickings, but do what you can when you can.  Missing the bike strangely enough.

Anyway,  as I was running along the other day I was trying to figure out why it was that I like trail so much more.  There is no doubt that part of it is that I am on trail, not on a road.  That is a big fat part of it. It is just so much nicer.

Then there is the reality that it engages my brain just that little bit more, I have to think about where I'm going to put my foot, and then again, or how to navigate an obstacle or whatever.

Also though, there is the reality that when you are running on trail, usually there are things like trees going by, and nearby, and it makes you feel f.a.s.t.! Look at all the stuff whipping past me!  I am a rock star!!!

When in reality you are just plodding along.....but having fun.
Posted by oreneta at 9:19 PM 2 comments:

Went down to Rush Lane yesterday in Toronto, reputedly the place to go and do, and obviously see graffiti, it was cool, and there as a lot of pretty cool work there, but it didn't have much edge, to me.  I'm going to have to be doing some serious photo taking of the graffiti in this city, cause there's a lot and a lot of it is cool.  Although a lot of it walks the line between murals and graffiti, which I find interesting. 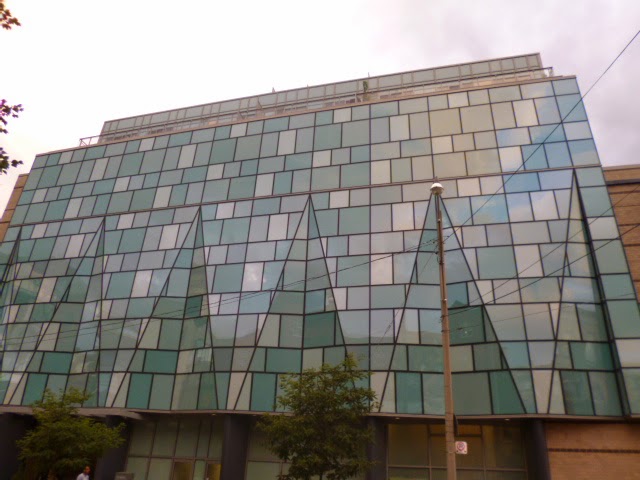 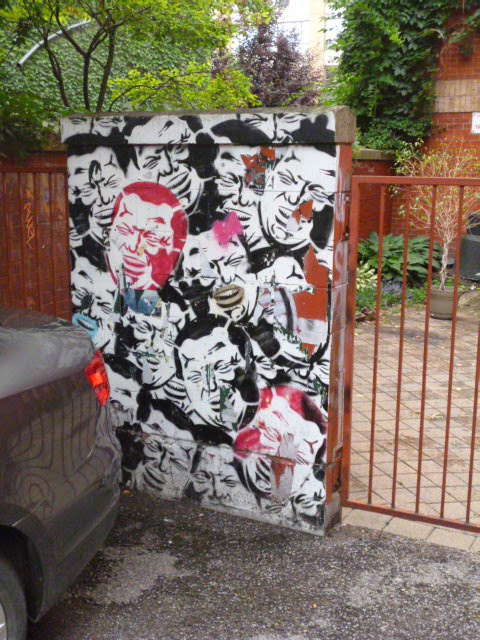 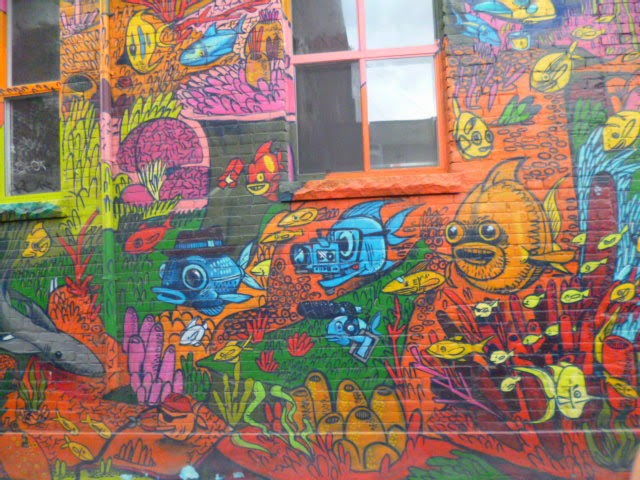 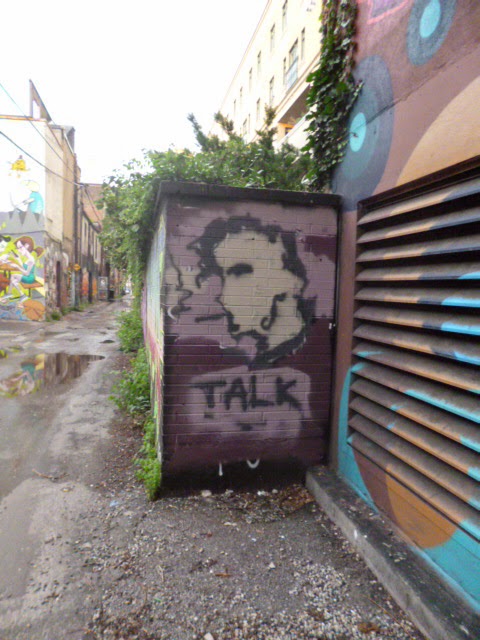 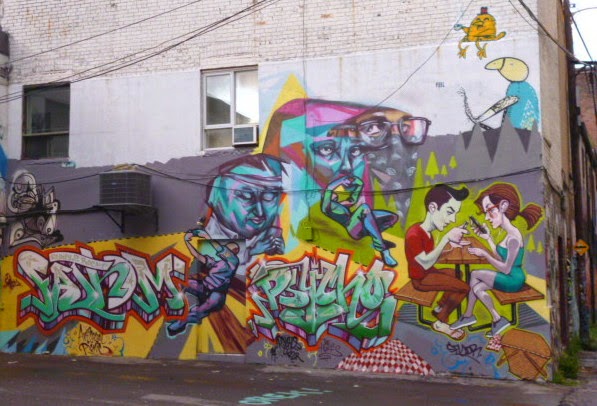 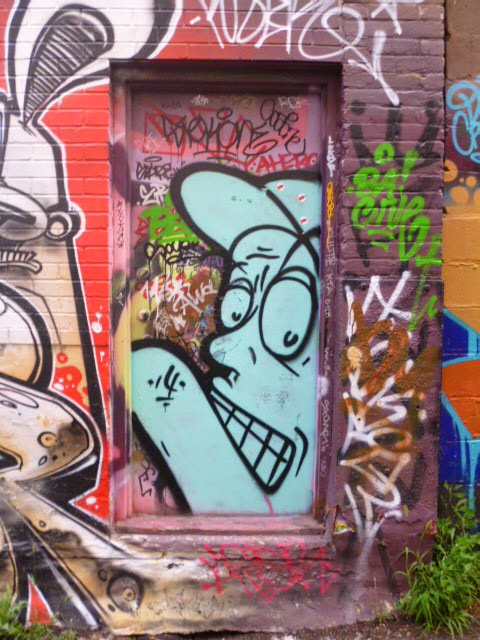 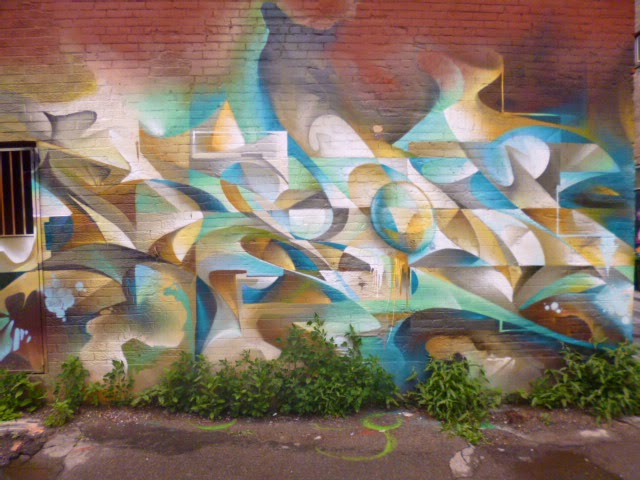 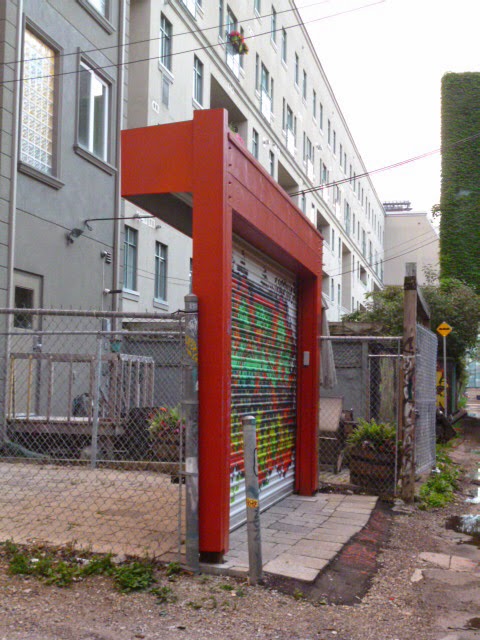 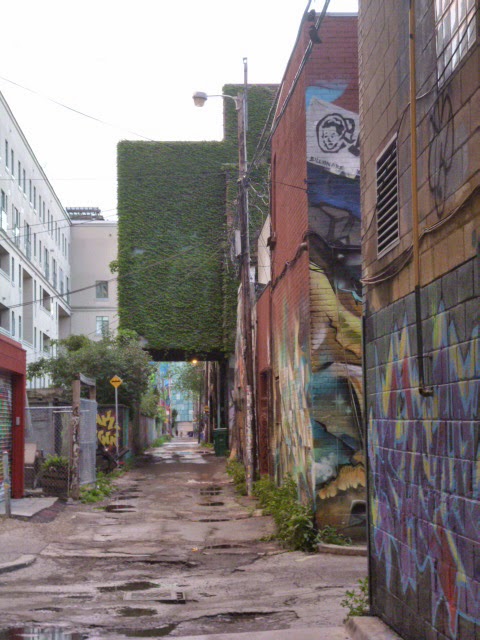 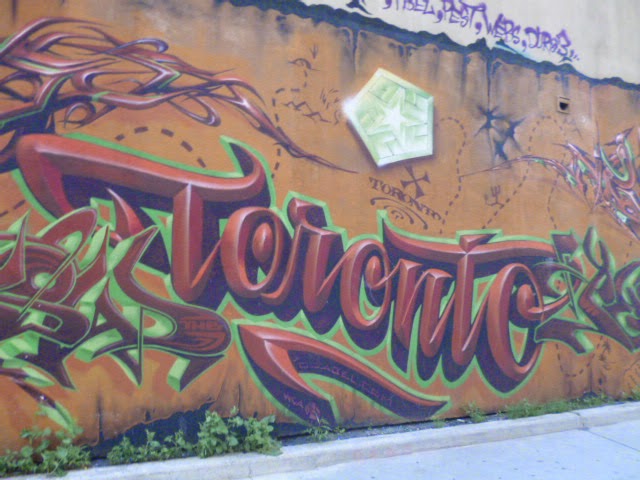 I am now a decaf tea drinker.

A kinda sad decaf tea drinker.  I love tea and I love a good cuppa, but the caffeine?  Cannot. 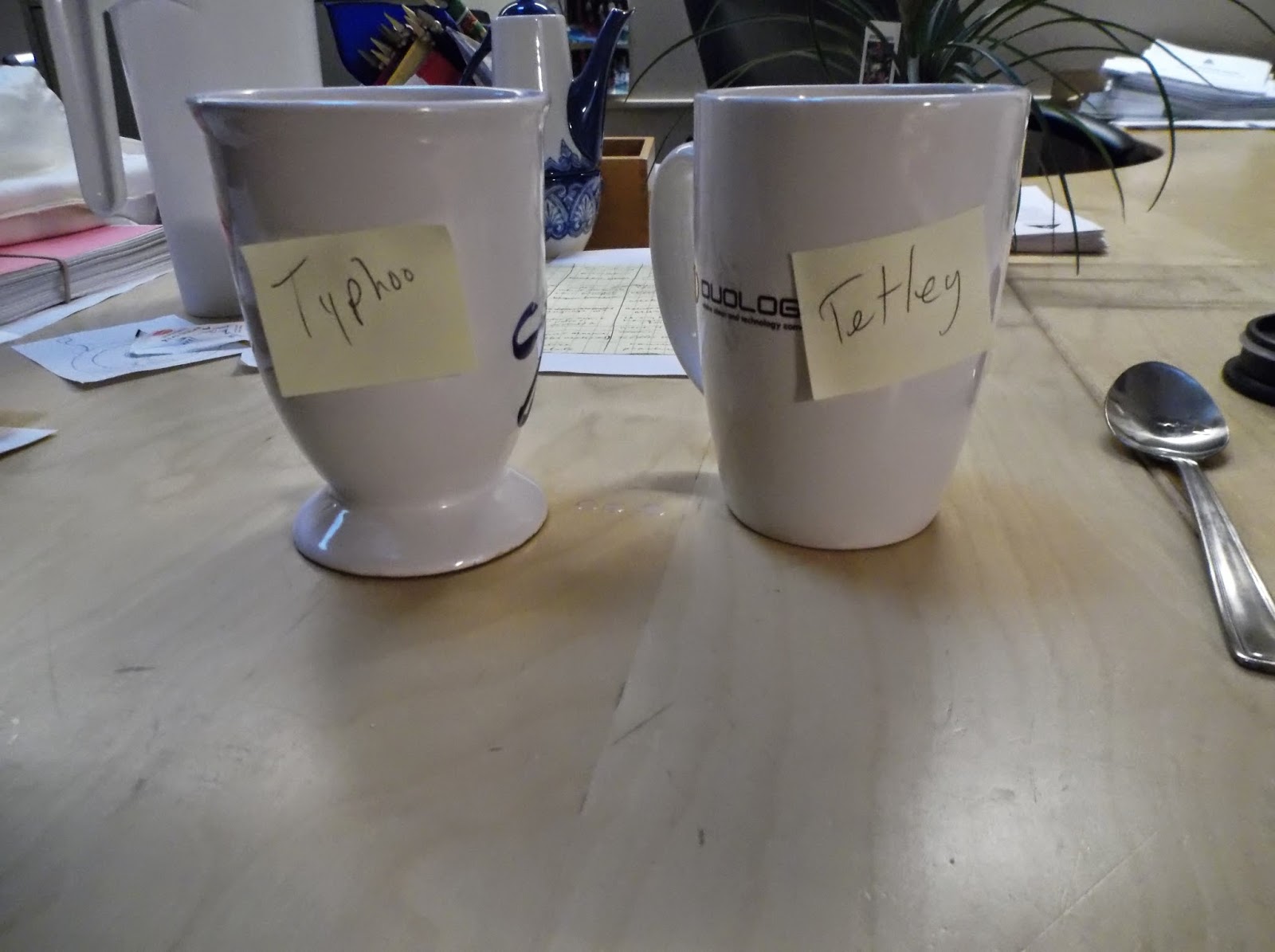 I have found some good teas in Spain that I like and I have come to like Rooibos quite a bit, but sometimes I just miss a plain old good cup of tea.

Here in TO I got a chance to taste test both and this morning, a cold and kind of rainy morning, I am doing an official taste test. 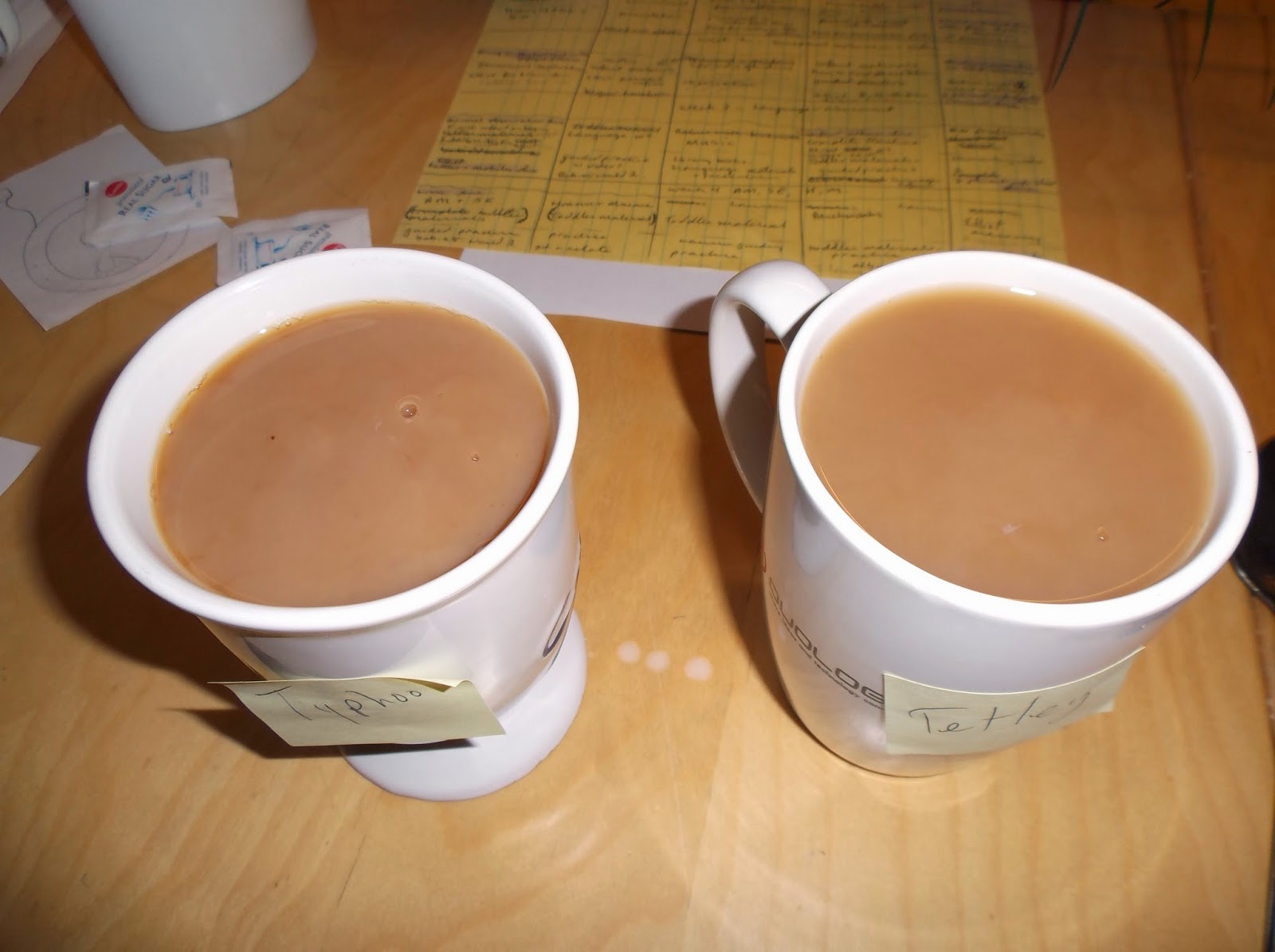 I have one mug of Tetley decaf and a cup of Typhoo decaf, roughly the same size cups, each with some milk and a teaspoon of sugar...here goes!
Tetley, is a good nice cup of tea, nothing remarkable, but nothing bad.  The Typhoo has the same taste at the beginning, but as it carries on, it has a woody sort of bite at the end, tannins I imagine.

Definitely like the typhoo better, wider range and depth of flavours.