Take a moment to have a look at that image.  It's pretty weird.

To me what is weirdest is how calm everyone is!!!!

Well,  I saw this image at a castle near where we're staying, and did a little homework on it.  It's apparently to do with a 16th century Dutch legend about the Baker of Eeklo.  There's a whole write up about it at this site  if you want to really dig into it, but basically if you aren't happy with your head from some reason, you can go to this baker, they'll chop it off for you replacing it with a cabbage as a temporary measure, then they'll kneed it a bit, maybe a glaze and a rebaking and put it back on for you!  According to the story, though I don't think it shows in the painting, sometimes the reworking doesn't go well, and you just have to live with a misshapen head.

Oddly, if you click over to the site there is quite an adorable dog looking out at us looking rather amused at the foibles of the humans.  He's sitting next to the basket of heads in the foreground.  Sadly, in this version, he's missing. 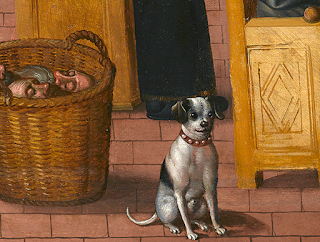 Great to see your blog going again. Tell us more about this painting. Its famous isn't it?

I don't think it's massively famous, and there wasn't a tag to say the painter's name, but I googled it. Does the link work in the writing? It's To a site with more info.