That sounds like horrid bragging, and I suppose at some level I am excited about this, but here's the real back story.

For a few years now I've been able to read in Catalan, now I can with considerable fluidity.  There are some words I don't get, but on the whole I don't have any real problem.  If I sit and analyze the sentences I am occasionally depressed by my spoken and written Catalan, I cannot express myself the way Catalans do.  Something I should actually study. Wonder if Conrad did that.  Study the way people wrote, and tried to imitate their styles to gain greater ability to write in English.  He was at least tri-lingual and probably quadri-lingual (Polish, Russian, French and English) and though reportedly spoke with a heavy accent, wrote some of the best English literature that we have.  *sigh*

In October or so, I started Spanish lessons, and low and behold, despite my general ineptitude at learning languages (never got a mark higher than a 5 in French thoughout high school and had to drop it in the final year as I was failing dismally) I can do this!  It helps we've been here more than 7 years, and I do hear it sometimes, and my students relate it to words in English occasionally,

Since my chief reasons for learning Spanish is so that I can read some of the amazing writers that are working in the language, that is a bonus!

Today, though, we went to an exhibit at the CCCB - which is an amazing place - always love what they do and the curators are geniuses.  It was about a Catalan writer, Salvador Espriu, who was educated before the civil war, endured the war itself and lived under Franco, through the transition and died in 1985.  An amazing time to be alive, not fun, but amazing.  Eldest got one of his books of prose for Christmas.

The man could write, he is famous for his poetry, and plays more so than for his prose, and the exhibit was, as always, very well done.

It was, however, humbling.  What a vocabulary the man had.  There were quotes from his writing on the walls of the exhibit and such a lot of words I didn't know.

Back to the drawing board, and I think I may have to read some more of his work.
Posted by oreneta at 1:45 PM 2 comments:

Who'da thunk that cabbage could be so cool!

I was cooking up a little bit of red cabbage for dinner, a pho type soup that lacked bean sprouts for garnish...so I sliced up the cabbage really finely - well, my chef brother in law would not have called it a fine slicing, but by my standards it was, then I tossed it into boiling water, to which I then added salt.

Look carefully at the picture......

See the blue in the water? 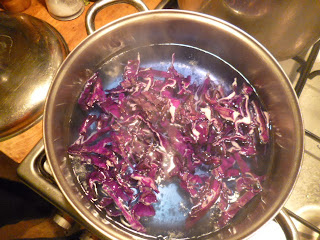 That was SO cool!  The water went really really blue, then a beautiful deeper and deeper blue until it went purple.

You should try it, it was beautiful...and yummy too.
Posted by oreneta at 11:19 AM No comments:

It has been a tough year for running. I came out of last year in Spain super strong and super fit and I felt great.  Got to Toronto and drove a desk and a car all summer, as usual, and knew I'd have work to do when I got back here.  Then I threw out my back in Aug, the end of Aug....and it's still a problem.

Seems I have either pinched the sciatic nerve or have a herniated disc.  Either way it is getting better very very slowly.  Very.

Between this and my insane schedule this year, I have not been running much, bicycle commuting a lot.  Running, no.  And I miss it.

I have also been walking a lot less, which is also an issue related to time, availability and my crazy schedule.

I went for a run yesterday and it was a sad pathetic mess.  My back was fairly sore, for no knowable reason, and I just didn't want to.  So, as you might imagine, I didn't really.

Today, another story.  Set off, thinking I would maybe go a long way, maybe do not much, but as I left Youngest got up looking for breakfast - I had said I'd make pancakes for her and her sister and her sister's friend who was here overnight.  That was actually perfect, my short route that I know by heart, and a bit of a time pressure to bring it home.

Know what?  It was great.

Towards the back part of the run, which is mostly slightly downhill, I had planned to be good and go carefully, but I felt great and I just ran it.  I didn't kill myself, but I didn't go carefully (I AM SO SICK of going CAREFULLY!).  I thought I'd pay, and pay and pay.

I got home, did the abdominal exercises I've been doing to maintain strength, but more importantly to support my back as I get older, and the stretching I've started doing when I realised I was losing flexibility with the whole back/sciatica thing, and know what?

Oh, what an absolute pleasure!

Two nights in a row I have gone to bed, slept all night and woken after 9 am.

That sounds pathetic, and my teenagers would ridicule me, but it has taken a while for the system to shake off the early rising habit that the alarm clock induces.

It has been a while

It has been a while since I've sat down in front of a blank blog page and had to comb through the day to see what I wanted to write about.  It's been a good day, Xmas day....Santa came, presents were opened, books read, candy eaten, arguments had, walks taken, naps taken too (THANK GOODNESS), the Queen watched...the Spanish king's address here in Catalonia wasn't watched live, TV3, the Catalan public TV station held a brief half hour strike.  Woe is me.

We had a big fat dinner with turkey and all the fixings, now sitting by the fire.  Nice.

Both girls are here which is a marvel, wonderful indeed.

Though they bicker...what a surprise, as do we with them....having to readjust to all being together again.

Neat to see the changes in Eldest.  She's so much older.  So capable.  So wonderful.

With Youngest the changes are more incremental, we see her every day.

Odd with traditions, how hard we hold onto them, even something as silly as a walk on Christmas day, but for me, it is an absolute.  However much the kids whinge!

Let's leave it at Merry Christmas all!

Well, life has been a wee bit hectic lately

And this poor blog has paid the price!   I had to look back to see what I had and hadn't posted!  Do I ever have a backlog!!!

As we are planning a pretty quiet family Xmas,  I should be able to get myself all caught up again.  Here's hoping.

Rather randomly, I'm going to start with some photos from when I went kayaking, last weekend maybe?  Seems longer ago than that, but it's been like that lately.

Went off with a group to the Pantà de Llhosa del Cavall, near Lleida.  Beautiful place and we had a simply perfect day.

The white stuff in the foreground isn't snow, but it is heavily frosted.  Not likely to get sympathy from the Canadians in the ice storms, but it was chilly for us unprepared Catalans! 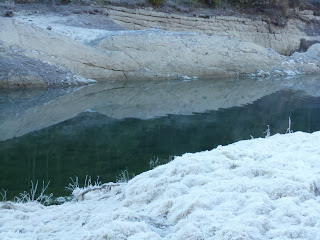 Hanging out in the sunshine to keep warm!!! 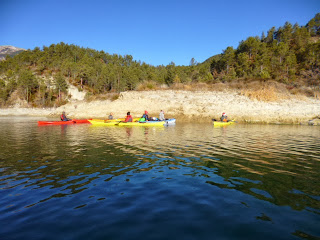 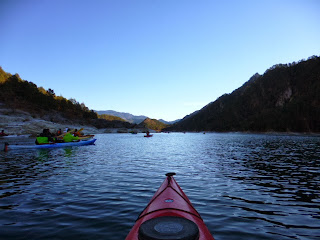 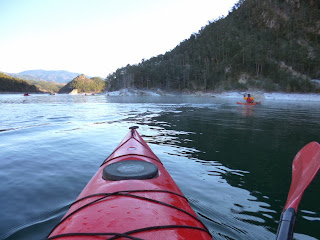 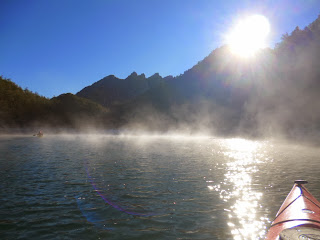 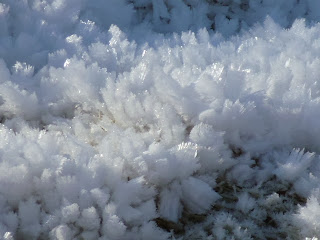 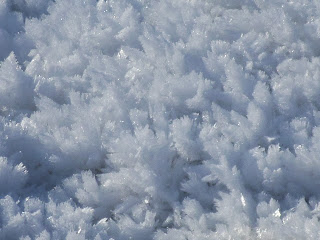 This was nearing lunchtime, and it started warming up...in fact I was BROILING right about here, and got around the corner and took a couple of layers off, blessed relief! 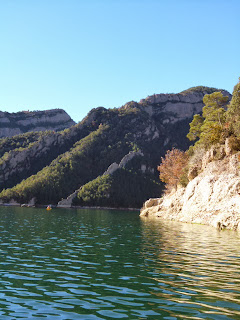 At lunch, the white stuff is dried out waterplants, not snow. 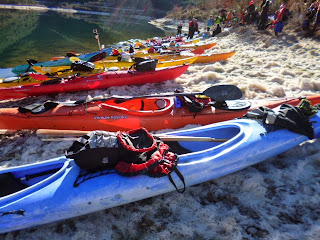 Not a lot of breeze even... 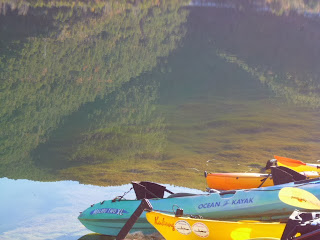 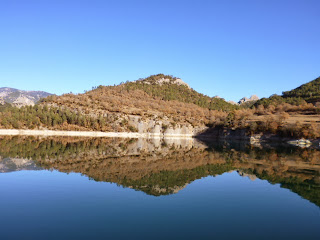 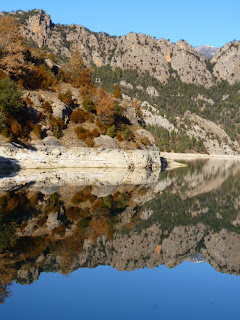