Youngest today, though in fact not for the first time, mentioned how we really should be able to send smells over the internet...and it would be cool.

Then she commented that the reality is that the vast majority of the smells would be farts.

how does this work?

Just got a linked in account, a couple of days ago, it's a course requirement, but it also seems like maybe it's time, or not.  It's interesting anyway, while simultaneously boring.

What confuses me is the fairly steady stream of people wanting to link up with me, how do they know I have an account?  When I set mine up I was asked to send link requests to any number of people (over 350!!!) - I sent out less than a seventh of that - but folks keep finding me!  And they are people I know.  Are they cruising their linked in account to go through their phone books?  Does Linked in send them a notification?  (this is my suspicion)

It is faintly creepy, I mean, there is a lot of personal information about yourself up there, seems, well, unwise.
Posted by oreneta at 3:55 PM 2 comments:

or the great black hole that eats our time!
For the master's I have to develop an online ID, ok, fine, I get it, it is a course in online education, IT etc etc etc


but he want's us to going 3 different groups for managing content.  ANNOYING!  I already have a system, it's called google docs!

So much duplication and so little time.

Note to self:  never use an activity based on seeing a crime and the police arriving with adults in some parts of Spain.  Works with teens, but when I (stupidly) did it with the adults, one of the members of the class was old enough to have been beaten frequently by Franco's cops when protesting in the 70s, and the other grew up in the Basque region in the late 70s and early 80s and remembers gathering rubber bullets as a game.  Neither of them have, ah, good associations with cops.

Note to self:  December is going to be a humdinger with the work for the master's, teaching many hours, report cards, marking for Toronto and prepping for xmas!

Note to self:  on beautiful days, get away from the computer and go do something oustside!

Note to self: uncomfortable chairs are ultimately better to work in cause they make you keep shifting your weight around and getting up. Much better for the health.

Note to self:  Turn of the computer and go do something!!!
Posted by oreneta at 2:58 AM 2 comments:

There's all this build up, they wanted people there early in case something happened to prevent the polls from opening, or in  case some right wing nut jobs showed up.

Everyone stood around in the sunshine chatting about a whole lot of not very much.  There were a lot of people, the politicians came out, we saw lots of people driving up and down to get into the area to vote.  They opened the polls 10 minutes early (some folks had to go to work!)

I was the first foreigner to vote, which kinda freaked them out, but it was all good.


I have not voted in I don't know how long, I want to say a decade.  We tried in the Bahamas, I've tried here, never ever ever with success.

And this is a pretty historic vote.

I haven't done the research on it, but it cannot have happened very often that the people of a country get out, organise a vote and go and vote.  No politicians or governments involved.

This has to be the purest form of democracy.  The people (literally) went out and voted.

They are counting it a victory simply that they got polls open.  The turn out looks like it's going to be HUGE; there are lines down the street to get in, and that in and of itself is a victory. 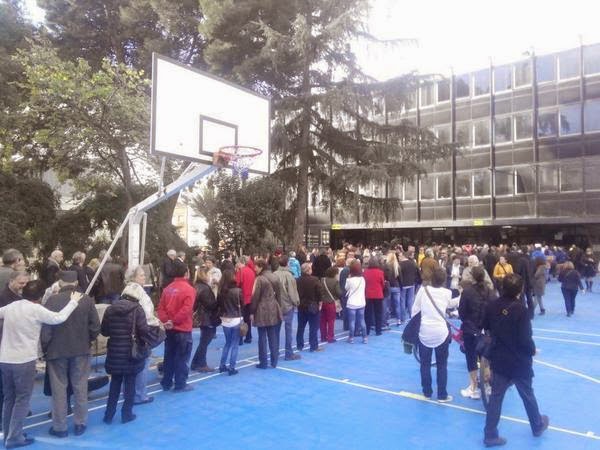 Lets see how this all shapes up.