Can't believe that happened, and my poor neglected blog!  Going to have to find more time (make more time) for writing here.

OK, today?  They day ended up rather Chuck focused.  It was supposed to be focused on getting the house listed for renting it out this summer, but the dog had to go to the vet this morning.

Day before yesterday the man and I took him on a 15K walk, which was lovely.Chuck however managed to run off a cliff about 15 feet high!  fortunately there was something of a sandy slope at the bottom so he leapt off, then started to roll down the sand, think he did three full rotations before getting up, shaking and coming over to check in on me!

We kept walking, he seemed fine.

He came back and his eye looked puffy.

Looked puffier over the evening and he started closing it.

Then he started looking at us through mostly one eye.

I had a look and couldn't see anything, so figured he'd scratched it, and it would be better in the morning.

Off to the vet at 10am as she opened.  He has indeed scratched it, she put in anaesthetic drop, and gave him an shot of anti-inflamatories...he seemed better after that.

Now he has anti-inflammatory and analgesic drops, which seems to make him feel much better.

Took him for a long walk, and he decided to eat poo.

Managed to go walking one day!

And it was marvelous...took Chuck and went with some friends.  We were supposed to have gone for a long weekend, but that didn't work out, I had too much homework, which they gave us at the last minute.  Poop.

Anyway, we had a lovely day. 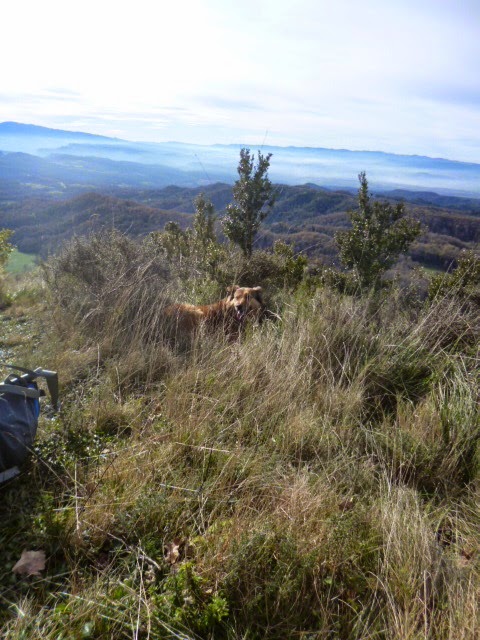 The views were marvelous, and so was the company 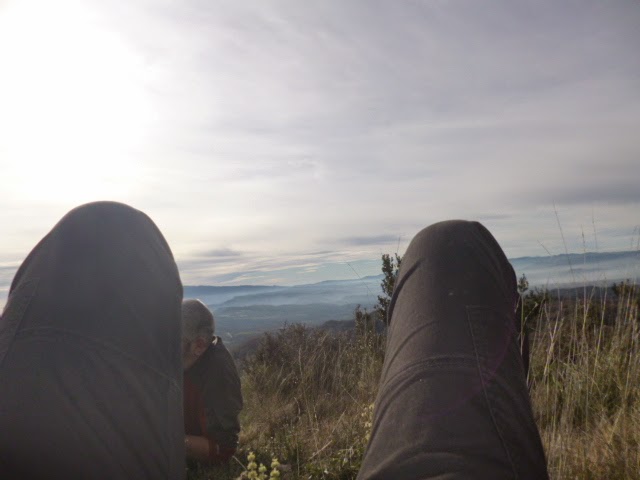 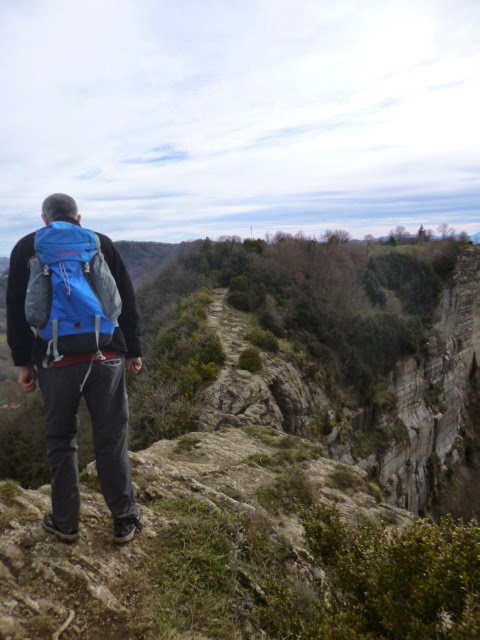 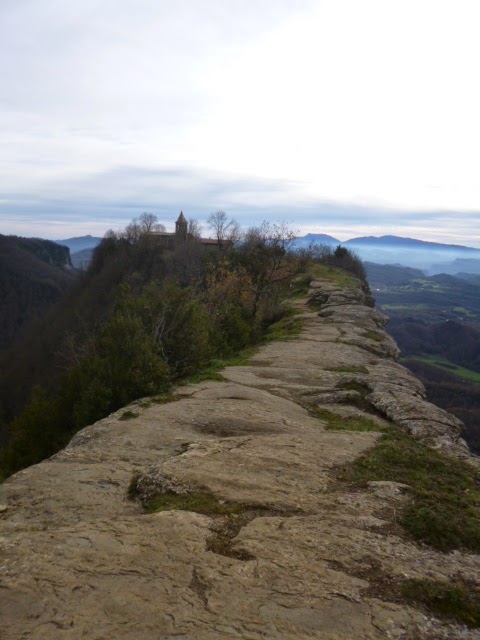 Chuck got on leash for those bits.... 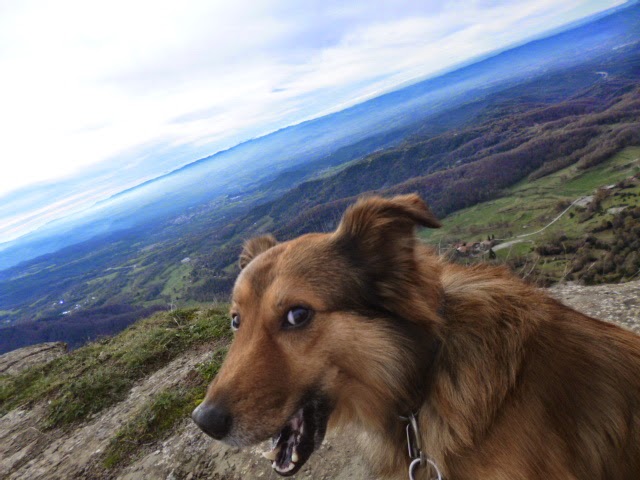 Not down the stairs though, he was cool here. 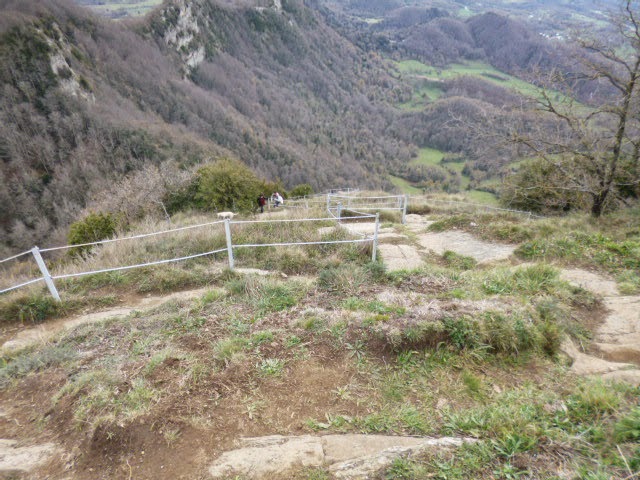 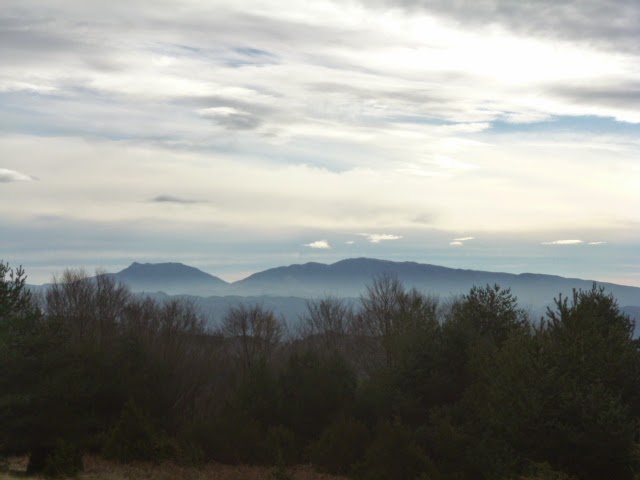 Montserrat in the distance 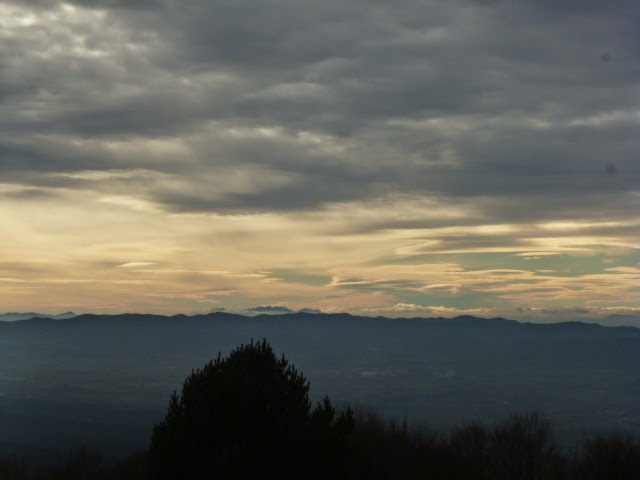 With the different trees it looks like a quilt. 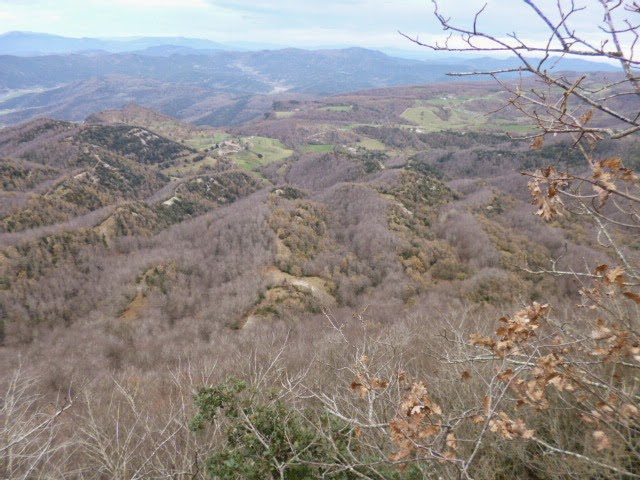 Sun went down before we finished.  Short short days. 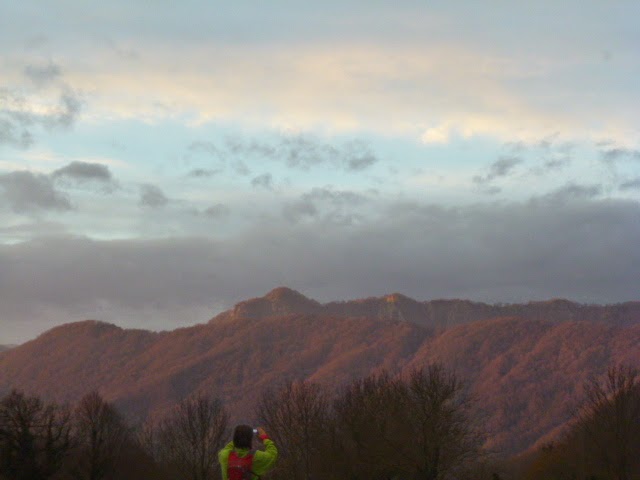 I know I am way to busy when I finally get into my photos and realise how gigantic the backlog is!

So, with no further ado,

I start to open that up and show some of what I have been up to, a series of posts.

Way back on November 2nd, or something like that, Youngest and I went into BCN with a friend to get a tour of the Ajuntament (town hall) there, which you can only visit on specific days, and with a guide.  I have to say that overall, the tour was kind of disappointing, with the exception of one room, though in fact we didn't need a guide to see it if we had just gone up on our own.  Here's some pics:

Youngest and I got into BCN kind of early, so we took some photos, I had always meant to take photos of these manhole covers, and finally did.  Pretty amazing, no? 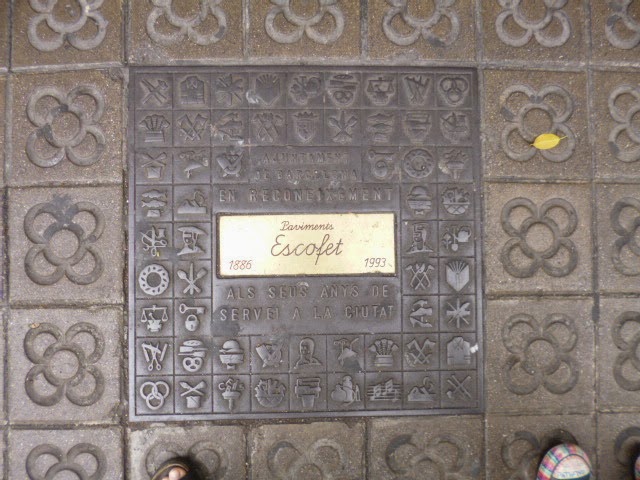 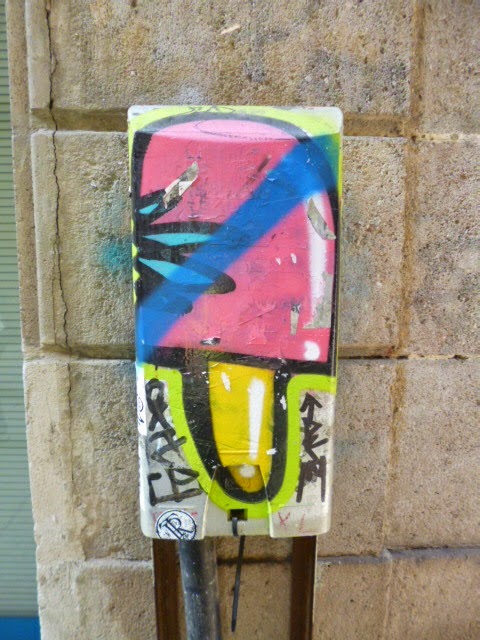 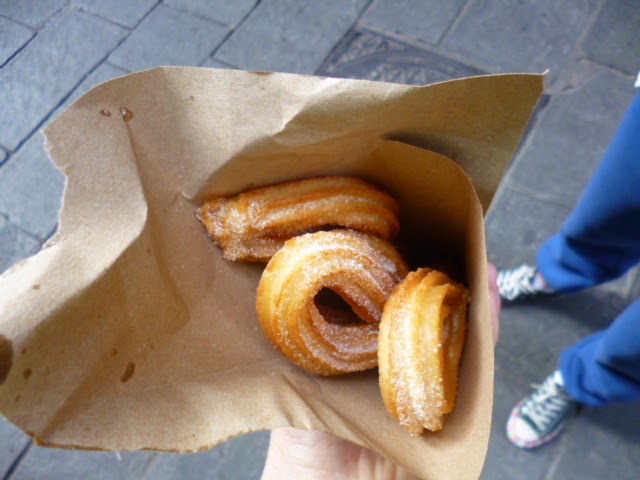 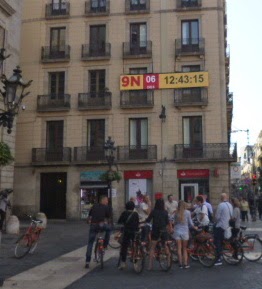 This room was amazing, the Consell de Cent I think it was called.  Amazing. 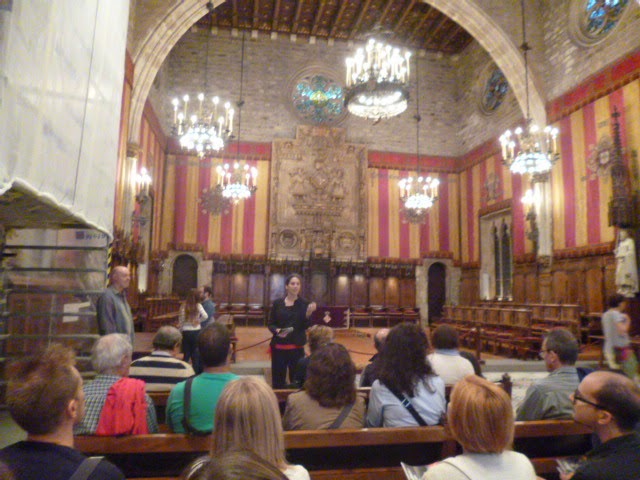 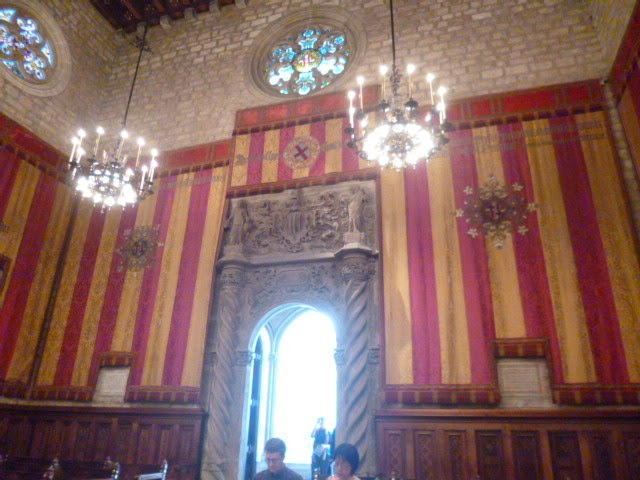 A painting, it was OK. 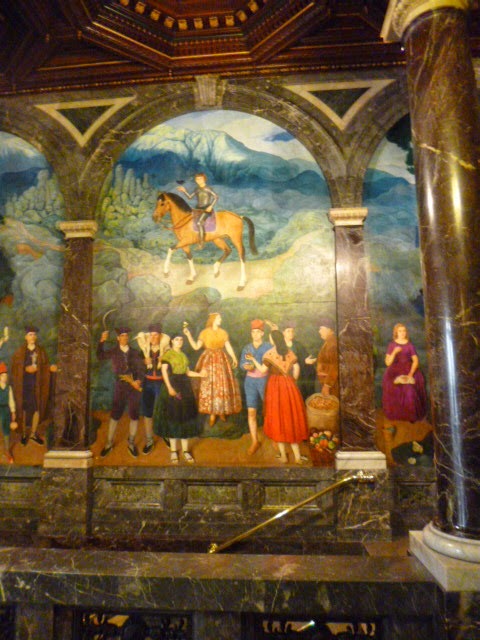 Then as the tour was short, we went on to see other stuff.....

For example here we are in the center of a building where three of the columns from the original Roman temple stand...and where they stood originally!  Cool. 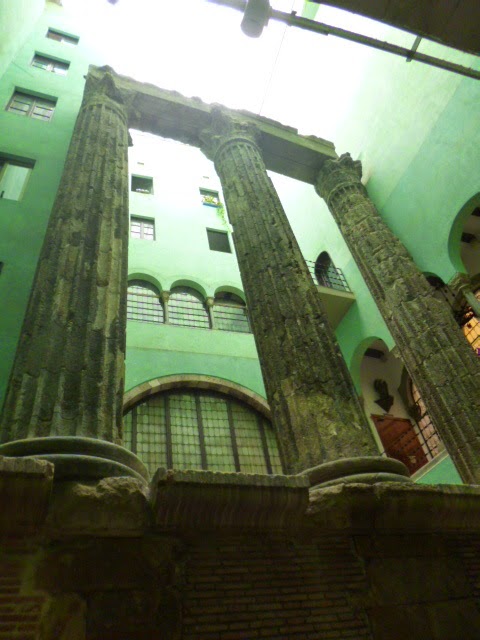 This is a photo of a drain.  It has a stone cover and if you look closely, about 2 stories down, you can see a little river running. 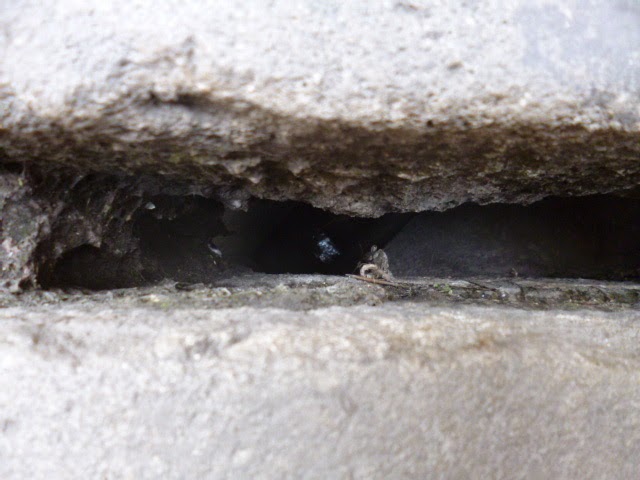 Maybe it's easier here......you don't want to drop your keys or your phone down there. 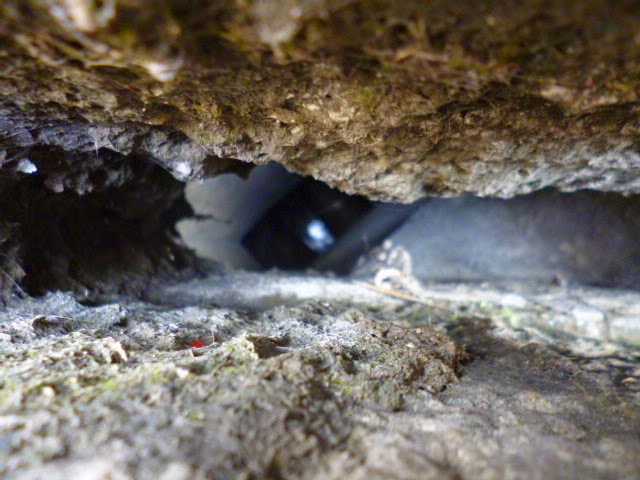 We went on to the Museu de la Ciutat, which are roman ruins again: 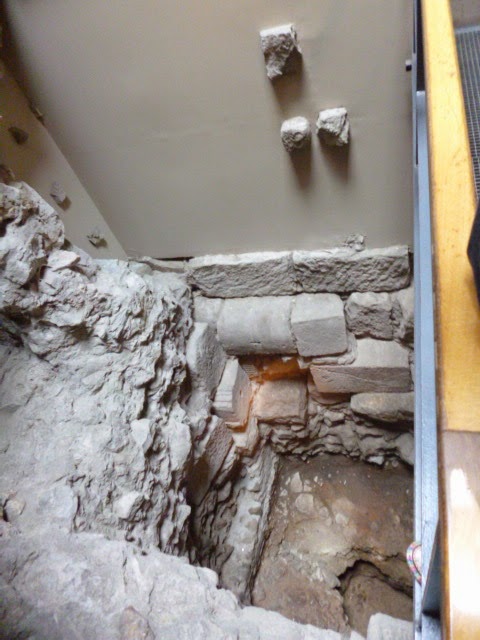 You can see they built it up from whatever other bits and pieces came to hand. 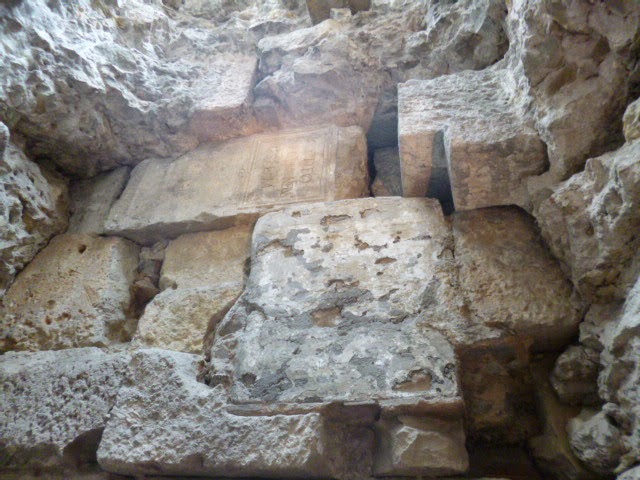 And atop it, this amazing room. 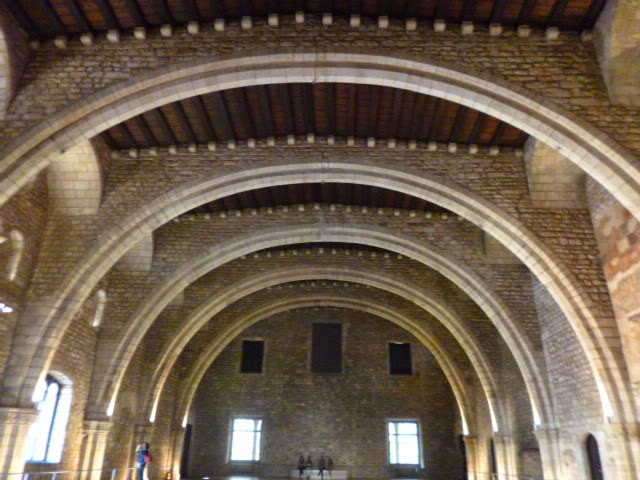 Back November 2nd or something.

I went walking with youngest at night a year or so ago and she loved it, but we didn't do it again.

Then last week, when she was upset a bit about - I don't remember what - and we couldn't agree on something to watch on the computer, I suggested going for another walk in the mountains in the dark.

She accepted with alacrity.

Then she wanted to go last night....and we went....and I was very tired before, but very happy afterwards.

And she wants to go tonight.

We talk a lot, well, she talks a lot more than I do, but that is good too.

I'm doing a Master's online, and it is really interesting and really good and I am learning a ton. A ton.

I am primarily a classroom teacher, which means that I work alone almost all the time.  I sometimes have a group of fellow teachers and we may confer on things, but I really never ever work in a team.

So that is interesting.  (in both the good and bad sense)

Add to this the online component, and it being in Catalan and you get a little more deeply into this.  When working entirely online there is no facial expressions, it is much more complicated to develop a sense of the other person, partially cause it is easier to cover up your feelings, and also cause it is easy to misinterpret or be misinterpreted as there is no tone of voice.

Add in the cultural element, Anglos are generally shorter and more direct in emails than Catalans or Spanish speakers, and you can have some misunderstandings develop.

It isn't directly what I signed up for, but it is in fact a valuable part of the learning process.  Things we need to learn.

Can't say it's always fun though.

I have to say that I have also had some pretty good laughs at times too.
Posted by oreneta at 1:03 PM 3 comments: