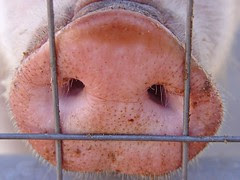 I talked to the woman about the language lessons and I have to admit I am feeling a little bit bent out of shape about it. She is asking for free weekly language lessons including conversation and grammar for an indefinite period of time. Not only that, but I risk annoying my boss. I cannot imagine going up to a complete stranger and asking for a favour of this magnitude. Imagine yourself on the playground, and someone mentions that Susy's Dad is a chiropractor, and gee, your back has been acting up lately, so lets just waltz over and see if they could give you free adjustments for the next few months, even though you've never really talked to them before, and by the way, your only available on Mondays.

Que morro is a Catalan phrase along the lines of 'how cheeky'. A morro is a pigs snout. I get the impression that when the phrase is used, the person is a little ruder than just cheeky, probably more like, 'the nerve'.

They have not offered anything in trade of any sort. Too bizarre.

I do feel rather uncomfortable about it all. I mean, really, I am not so desperate for company that I WANT to spend time hanging out with Catalans who speak appalling English.

As I am scheduled to teach for a total of 8 and 1/2 hours on Monday, starting at 9 am, and working on and off through till 9:45pm, she is simply going to have to come with me while I walk the dog. It's the only time I have. That could actually be OK, although she looked pretty dressy. The difficulty is of course that the woman is the sister of a woman who has two kids, one in each of MY kid's classes. So there may be a payback for my kids, and if I get to know the family better, there may be a payback for me in getting more integrated in the community, which is why I am considering it. Reluctantly. Plus I feel a bit like if I say no, there may be some kind of payback to my kids, and not a good one. It does seem pretty nervy though. I mean really. What an awkward situation. She's going to have to come while I walk the dog or not at all, which right now I would prefer.

Oh, and it turns out that the younger child is also doing sweet d*ck all during the Castillian lessons, there is apparently not even a pretense of an effort at having her learning anything, she just goes off and plays with toys in a different part of the room. My oh my oh my. Granted, her Catalan is coming more slowly, and there is not the same urgency about it, but to not even try, especially when she is younger and neurologically more receptive!!!! *Grrrrrr* Gosh, this is a bit frustrating. I am writing late at night, and sounding a wee bit testy. Time for bed.

Well I am still feeling testy about both situations, but it is a beautiful crisp day, the clouds that went over yesterday were a front that has brought cooler air, and the dog and I just had a 2 hour walk in the mountains.

I would also like to announce that I have not had a headache all day, my sore throat went away, I don't feel grumpy or short tempered, and I feel HEALTHY!!!! Weeeehaaaaw. I did have a rather sudden and unplanned nap this morning, I was sitting on the couch working on some writing when I felt incredibly sleepy. Set the laptop aside, lay down, pulled the blankets up, next thing I knew it was 1pm, and the man was coming home for lunch. That was luxurious. Life can indeed be very very good.
Posted by oreneta at 2:59 PM

oooh, I love naps. They're the best.

That is a little nervy. But I love the picture of the pigs snout! LOL!!!

Is this requesting-private-lessons-with-no-talk-of-remuneration thing maybe a cultural difference? It just sounds so weird...

Those spontanious naps are the best aren't they?

So glad you're feeling better - "healthy!"
That woman has some gall/nerve re: the language lessons. What a break that she wants Mondays only and you're so busy Mondays. Well, I would consider it a break because it's easier to say, "Sorry, not available."
Lessons with dog walks only!

(Re: the "other" Beth's comments as to walking her dogs for two hours & the bunch of them ending up dead. She cracks me up. I couldn't do a two hour with my dog walk either.)

Beth: Naps are the BEST. and I don't usually walk him for two hours, it was pretty lovely though.

Trish: I actually asked if this asking for lessons thing was normal....got a big headshake all round. Geez

Beth: Odd isn't it. Beth is pretty darn funny isn't she. The weather here is a little more inspiring which helps with the walks.

Just a word of advice-- there is no need to give language lessons (especially free ones) to anyone unless you really want to. As a native English speaker, this will probably not be the first or only time you get hit up, and my suggestion is to nip it in the bud, now! You hardly have time for yourself, these days! Really, preparing for and giving lessons is time-consuming and I for one have decided it is not worth my time unless I am being well-paid for my effort (probably more than most people would pay) or unless there is a particular reason why I would choose to do it for a particular person.