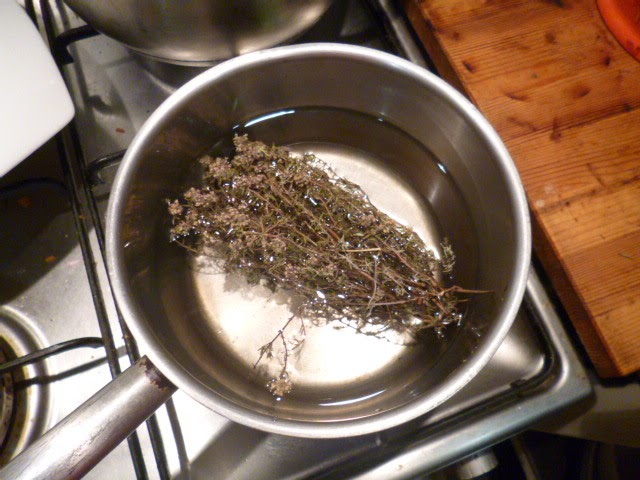 I have been a wee bit under the weather.  Some digestive complaints shall we say.

A friend - a very very Catalan friend - called up to see if I wanted to go walking.  I said no, as you might imagine, as I needed to be in closer proximity to a loo and hadn't eaten a lot.....he said I needed aigua de farigola - which I had read about!

Though I had heard of it as a soup.  And in fact other Catalans had mentioned it to me too.  It has to be about the simplest thing in the world to make, take some thyme (farigola) - dried - that ideally has been picked in the mountains, and put it in water to boil. Like making tea.

If you are making soup from this, traditionally you would put a piece of bread in the bottom of the bowl, with a lot of olive oil on it and maybe a raw egg broken over it, then pour on the boiling hot steeped thyme water.

Supposed to be good for a hangover too.

I just used the water and thyme.  It turned out to be a super Catalan event, cause my friend from the phone didn't have dried thyme, only fresh, so he called another friend to come by and drop it off.

Such is the power of aigua de fariola.

Interestingly, after I'd made it, the man stopped and paused.  He figures his mom used to make it as it was stirring memories deep in his mind and smelled familiar.

She was a good Catalan too.
Posted by oreneta at 11:10 PM