One thing to understand here is that scooters, those skateboard-y things with a handle to steer with and a brake, are the domain only of children and teenage boys up to about 14.  Exclusive domain.

So the thought of a middle aged woman riding one is very weird, but you know what?  The suckers are super efficient for travelling in cities.  Fast, small, easy to get on and off of, you just take them into the stores and public transit...light and easy to carry...a dream.

So, Monday morning, when I was going to go into BCN....I had a logistical problem.  Normally I ride my bike to work a village or two away, but if I want to go into BCN I have to leave the bike at work, go in, go back to work, get the bike and ride home, rather than just go home....an issue as I have to work in the evening as well.  So, the bike is out.

Then there is the bus.  None leave early enough.

I was thinking of running to work, showering on the beach and going in, but it was all a little involved. Showering in the dark on the beach, having to bring working clothes when I run and then wet smelly running clothes into BCN...meh

Then I thought of the scooter!  YIPEE!!!!

I did have one minor accident.... 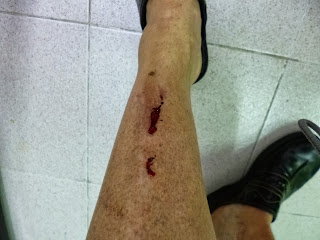 OUCH!  And some bruising on the other leg...

Despite that, it was a complete success and I will probably be scootering my way around BCN again....especially on a Monday!

Yeesh. Wear some protective gear next time you ride, though... :D

Very chic to scooter as an adult in Paris.. throw on a little scarf and you are all set ;-)