When you are packing up your life and sell off a bunch of it to make a big move, like onto a boat, sometimes you have to guess about what is going to be useful and what you can kind of do without.  I debated about bringing the yoga mat with me, thinking it would take up a lot of space and not be super useful…really how much yoga would I do?  I wanted to do a lot, it’s good for me, but I wasn’t sure I really would.

Well, I was right in some ways, I haven’t done any yet, though maybe today as we are having a rest day as Chuck has diarrhea and the next stop is a minimum 5 hour cruise….but the yoga mat has proved to be worth it’s weight in gold.

It’s primary use has been to cover over the dog’s bed at night.  This started the first night when it was absolutely PERISHING on the boat and the dog would have been very cold, so I stretched it over the gap, lay a folded blanket on top and he had a cosy cave that was draft free, or mostly. 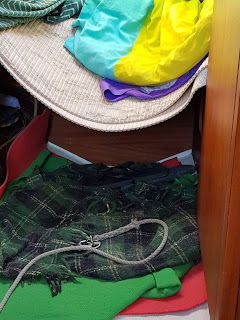 Then, the other day when we were sailing, well motor sailing into a fairly good sea, Chuck was fairly unhappy and was moving around like an fragile old man who finds the sidewalk he’s standing on covered in ice.  Pretty much exactly like that, so I laid out the yoga mat on the floor downstairs, it is designed to be non-slip, and Chuck was so much happier!!!!

So, it’s new second role in life, non-skid flooring for the cabin when we are underway in a sea.