It sounds so stupid, but you get used to it.

I had to change the recipe up, first of all, vegetarian, a stretch for most Catalan recipes....then I added my secret sauce. The ultimate make everything taste better (though maybe not chocolate)....Thai/Vietnamese fish sauce. God's greatest gift to humanity. Maybe humanity's greatest gift to humanity, whatever. I brought four litre and a half bottles when we left on the boat, and replaced every year.

It is, however, not even faintly traditional.

The other excitement is that our neighbours have a RAT. Now, rats are actually kind of cute, and I have even had a pair as a pet for a year when I babysat them for a friend...but wild rats, eying your home as a potential buffet....not so cool.

I mentioned it to the guys downstairs, they had a rather hilarious (to me) five minutes of looking. They were not exactly the image of brave warriors vanquishing the evil from the home and hearth. Two nervous guys with one broom between them would be more like it. Funny. Glad they aren't defending me from bears or anything, and with the raccoons? Definitely I was more brave. Just sayin'.

I saw the rat on Saturday, on the neighbour's back terrace, which doesn't connect to our place without a longish exposed pipe-climb(Thank god) with a firmly and now semi-permanently closed window and door at the top. I SO do not want rats. Eldest saw one on Sunday, and I saw one, or maybe two today...they were talking to each other so I get the distinct impression there is more than one. Sort of like mice and roaches, if you see one, you've got 20, if you see two, 40...three...you don't want to know.

They hung around so long, I even got a photo, 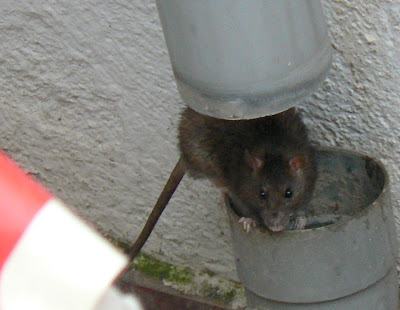 He looks like a very determined rat. And I bet he has a very large family.

I think he has a bit of a smirk on his face; a mocking smirk, daring you do come up against him and his friends. Reminds me of the movie Ratatouille when all the friends and relatives showed up.

Ever since reading Camus' The Plague, I get an awful feeling in the pit of my stomach whenever I see one.
Yours looks like a particularly vicious, snarling beast - stay away from him! Take Care!
Did you go around to the neighbours to warn them or were you hoping to get everyone in on an organized activity to get rid of them? GM

Hola canadenca - This rata catalana seems to have a healthy appetite; he's already eaten a good chunk of the pipe!

He doesn't look like Stuart Little at all, does he? I'm like you. I'm fine with them as long as they keep a little distance between us.

Is it National Run Into Vermin month over there because you're on a roll with the rodents?

Fish sauce -vegetarian? Are you French or something!
Let Chuck get the rat - he'd deal with it sharpish and probably feel rather pleased with himself afterwards.

mmichele, he doesn't look very sweet at all does he....gak.

Dawn, mocking indeed, and I am quite certain he has a VERY large family.

GM, I told the neighbours hoping they would deal with them, as they are in their terrace and I cannot even get there. Hopefully the rats cannot get here.

Swedishexpat, I suspect they are eating the neighbour's dog's food....gross.

Hula, what has been going on, no? Me and rodents...it has been un-freaking-believable. None came by when we were camping though for which I am profoundly grateful.

Boo, wish I could let Chuck at them, not our space, and their dog is about the same size...longer legs and shorter tail, both otherwise....

LP, I thought you'd enjoy that....it is manna from heaven no? Makes everything better.

Now you know why we have so many kitties... no more rats now! You need to adopt a cat!

They are determined... but they do love peanut butter.

Anyhow, I commiserate with you as I am so not a rodent fan