A busy day though we didn't move.

I believe I walked about 20k today, peanuts when I'm going, but still lovely.  I went off this morning on the train to go get Chuck's ashes, and then came back through the Hague. 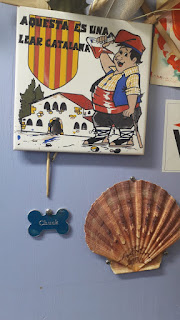 The tickets to the Royal Collection yesterday included another museum as well, so, since I was there.... And it was OK.  The paintings were all hung in that old fashioned manner jam packed into the walls with no space between them, and they were frankly pretty mediocre.  There were a couple of OK Rubens and a dreadful Rembrandt, can't believe that was actually his.  Weirdly, all the dogs on the paintings looked the same, sort of white and brown spaniel jobs.

That was OK.  Apparently I'm still 14 in some ways though, left to my own devices, lunch was fries and an ice-cream cone.  Mmmmmmmmm.  Then I went off to see the building where they do the international criminal cases.  Just cause I wanted to see it.  And it was pretty cool, built in the Peace Palace, finished the year before WWI. Yeah.

There was a world Peace Flame monument with rocks from every country.  This one's Canada's, with the black and red horizontal stripes.

Then I wandered through town a bit before deciding to walk back to the boat, about five and a half km.  Saw this adorable unobtrusive statue on the way

And these very neat hats.... 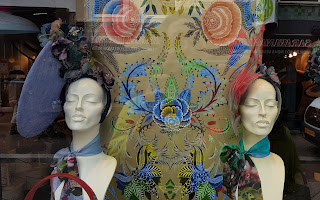 And there were these adorable goslings getting a swimming lesson.  Their parent had led them up to the sidewalk level, about 4 feet above the water and then flew down to the pond.  The goslings dithered for a bit and then one by one plopped off the edge.  I tried to video it, but I don't like watching through the camera, so I watched myself and got a glorious video of my hand over the lens!!!!! Never gonna make it as a professional videographer, but I'll see cool things.

I did manage a photo while they were dithering 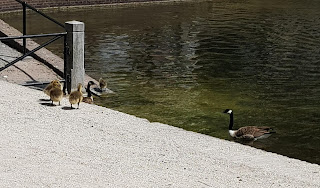 And another after the jump while they were preening their fluff after the adventure.

This evening I went for a walk after dinner, we're in Voorburg, and discovered that Spinoza had lived in this town for a while as well as the Netherlands' most important scientist - presumably historically as there have been 13 Nobel prize winners at Leiden University.  The man even knew his name, Huygen.  I'd never heard of him. He had a nice house and there were some parks with giant trees.

Wonderful day. Dutch heritage is a mystery. They beat up the Brits regularly and ended up taking over the top job.
I did business with a Dutchman who said they are the only people who can buy from the Jews and sell to the Scotts and make money

That sounds like the dutch we've met. They alsp repaor everything, every little town has a shoe repair place, a place to get clothong repaired and electronics, phones and appliances. Wish we had that.