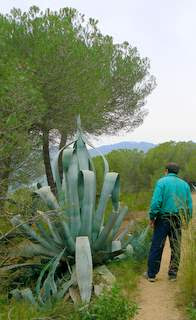 The man and I had a day out today, how nice was THAT!

The kids had fun day at school, eldest went skating, youngest to some sort of indoor playground, then to a friend's house for lunch, a real friend who volunteered to have them so the man and I could go out. After that they went to the local sport center for a dance, well youngest did, eldest felt ill and spent the afternoon on our friend's couch watching Spanish soaps, which is enough to make anyone feel unwell.

The man and I went into BCN which was WONDERFUL. I got some Christmas shopping done, had a coffee in a cafe while I waited for him. You see, we were kind of going at different paces this morning. I was all bustling along, list in hand, intent on completing as much as possible and honestly enjoying the freedom of moving at an efficient adult pace after YEARS of kid pace. The man however did not want to break a sweat (something akin to a death sentence and to be avoided at all costs) and so was sort of, you know, piddling along. We, as we often do, parted company and met up again a couple of times, giving me the chance to have a cafe amb llet while I waited. Mostly we went along together though...

When we got back to our town we went for lunch! Just the two of us, one of those lovely southern European two hour jobs.

The place we went is highly recommended as the best in town and the most Catalan of all the places. We started with a salad, I had water and the man a .75 liter bottle of wine, then we both had the mongetes, warm beans with straight warm bacon fat dripped over them and salt, and a couple of slices of pure fat bacon on top. We're talking winter peasant food here. It was delicious. I think the man is going to take an extra cholesterol pill today, I may snatch one of them too. The second course for the man was meatballs and sepia (cuttle fish) in a fishy romesco sauce. Very good.

I had peus, or pigs feet, following unintentionally the pig theme of the last post. I was worried I would be hungry at the end though. They were seriously good, cooked in a savory broth with artichokes and red peppers...I mopped up every single drop of juice with the bread.

I had crema Catalan to finish, along with my second cafe amb llet of the day, both decafinated I can happily say for the sake of my entire family. Crema Catalana is a creamy fatty yummy cream and egg mixture similar to creme caramel, but served in a small clay dish with burnt hard crisp sugar on top. My oh my. What a lunch.

You know what else I love about this, we each had a four course lunch, a full bottle of wine - which the man all but finished - a bottle of water and coffee each for 19 Euros!!!!

We then had a two hour walk in the hills with the dog, and the girls came home. The man had a nap (what a surprise) and we are having movie night tonight!

You know what I liked best? Spending the whole day with him...undistracted by anything or anyone else.

That sounds like a wonderful day. I don't think they have that type of food here but it sounds good.

We are at the stage where we can leave the house at anytime because the kids are old enough to stay by themselves...except the 10 year old. We have on occasion left her for a little while but usually there are more than 1 child home. But I do know what you mean by kid space. Of course now the kids call it parent pace :-)

WONDERFUL - YOU DESERVED EVERY MINUTE!

Sounds like a wonderful day. I love it when Sirdar can go out and have lunch together when we are doing some running around. I don't know if I would enjoy the food you mentioned, except the wine and the Crema Catalana. Here it is called Creme Brulee (there is suppose to be an accent on the first e). My sister had it at her wedding. I love it, but oh the calories. I have many recipes for it, but have not attempted to make it yet.

Of course, you had the 2 hour walk in the hills which is helpful in burning the calories from such a great lunch.

Sirdar: It is lovely the increasing freedom that reappears isn't it.

GM: It was wonderful, and if you want to eat out again when your here, I know where to go...even better than last time.