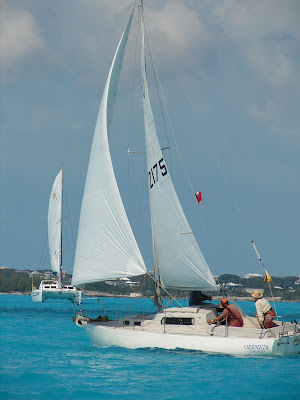 Long long ago in a land far far away there was a family. It seemed a pretty normal family, a Mom and Dad and a couple of little girls all living in a house in a fairly large North American city. They all loved books and stories, every one of them. The parents also had a slightly peculiar passion for all things to do with the water and boats, so not unnaturally they got children's books that told fabulous stories about kids and the sea.

One of the absolute favorites of the whole family, even the Mom and Dad, who would come and sit down to hear the stories read aloud was an absolutely fantastic series written by a man named Aurthur Ransome who was himself passionate about books and the sea. He made several interesting voyages and lovedlovedloved both kids and boats, so he wrote a book called Swallows and Amazons which was the first in a series of books all about children and boats.

The stories are about a group of five children from two families who meet up in the Lake Districts in England and are wildly undersupervised. They sail and camp and are pirates and explorers, and they have untold numbers of adventures.

These stories are some of the best ever written. They are extremely British, and some conversation around the rather Victorian (read politically incorrect) phrasing may be necessary, but I cannot recommend them enough to anyone.

Well, this fairly normal family one day decided to do something not quite so normal. They decided to get a sailboat and move aboard her and travel around together seeing what they could see, being together and sailing, swimming, rowing, reading, drawing and painting...among other things.

So they started to look for a boat. This was not so easy because they did not have the biggest budget in the world, but they had a lot of determination. So eventually they found the perfect boat, and they bought it; but it didn't have such a perfect name. Adagio. Which is a fine enough name, but it wasn't perfect. So while this family scrubbed and swept and painted and polished and re-greased, and re-wired and re-reaved and all the other thousand and one things you have to do to get a boat ready for sea, they thought and they thought and they thought. They thought of many many different names.

The two little girls wanted to name the boat Swallow after one of the boats in their favorite books, but the Mom and Dad did not want to go through life in a boat nicknamed 'gulp'. The little girls were insistent. So the parents thought and thought some more. They thought that since the Dad was born in a different land far far away, and spoke a different language with his parents and sisters, they would look and see what the name for a swallow, the twittering kind, not the one that goes gulp, is called.

They looked and looked, and one day they discovered that a swallow is called an oreneta in the Dad's mother tongue, Catalan. Well, now they had the perfect name.

So they christened their boat Oreneta. And so they were called also called by the many friends they made while sailing...as are all people who live and travel on their boats, so if you ever decide to move onto a boat, you must have the perfect name or else you will forever be hearing something silly like, "Here comes the Mom's Minks!!! Do you think they can stay for dinner?"

Well, after this family had sailed their boat from Canada all the way down the east coast of the United States and across to the Bahamas and back to Florida while having many adventures and making many exciting discoveries along the way, they went back to Canada for a few months to avoid the hurricanes and to make some money. While they were there they got an offer to move to Spain and work. They needed to pursue papers and citizenship to do this though which was a long and painfully boring process, which has no place in this tale, but it also meant that they got to go sailing for another two years which wasn't boring at all.

After their third year aboard all of the papers were in order, they packed up their bags and moved to Catalonia in Spain where they are still, right now, and when the Mom started up a blog to keep in touch with all of their friends and family and to record, journal and think about this new not quite so normal twist in their lives she had to pick a name, and since she still felt rather like an Oreneta rather than anything else, but also an Oreneta that had suddenly found herself squarely on terra firma - as is their boat - it seemed a good name for the blog, because that is about how her life felt.

So she named her blog Oreneta Aground...and thus it has been ever since.

I hope that they all live happily ever after.

This story was brought to you by Oreneta, but prodded by Trish who came up with this fun meme...to explain our blog's name, and we are to tag people as well. Now, let me think...I am going to tag Jocelyn at 'Oh Mighty Crisis' and Nomad's art blog 'Poena' and anyone else who want to play.

Hope you have enjoyed it.
Posted by oreneta at 7:11 AM

What a wonderful story. You created a mini-history of your family's fascinating life which I thoroughly enjoyed reading.

And I always wondered about the name Oreneta. Great choice - great compromise with the girls.

What a fun story...I had no idea, but am so glad I asked! Thanks for playing along ;)

that is a wonderful story Rocky!!! Can I be a part of your family? ;)

What an awesome story!! You lived your dream. I think that is so wonderful. I would like to live my dream but I don't see it happening now. We discussed moving to another country to live for while but now that the kids are older and into many things and parents aren't so young anymore, that dream would be hard to fulfil. However, my company was bought out by an international company and there are opportunities abroad...should I be interested :-)

I loved Spain when I was there. Australia sounds wonderful too. But, I will probably stay in Canada.

Wonderful story! I am always so inspired by folks who say "what the heck" and live their dreams.

Beth: It is a rather cryptic name, but I like it, I am glad you enjoyed the story too. How are you feeling?

Trish: Thanks for asking, that was fun to do. A great meme idea.

Bullwinkle; Didn't you know? You already are part of the family.

Sirdar: Every dream is different, just like everyone. It worked for us. You seem pretty happy, aside from the DIY projects.

Hulagirlatheart: You start with what the heck, and then work your tail off, but it is fun. I'm glad you liked the story.

You filled in a bunch of blanks for me--and other parts of it, I had already pieced together.

I will take you up on this tag...but sometimes it takes me awhile.

Jocleyn: I thought it would bring things together for people, it is kind of a confusing story if told in fits and starts...glad you don't mind the meme.

Wow, that is a fascinating story and sounds like a great adventure. What an awesome education you girls received with all the travelling. Thanks for sharing your story in such a story book way.